opportunity for both neighboring nations to showcase their history.

Saint Lucia and Grenada share almost the same history. Both were occupied by the Ciboney Indians. The Arawaks then came followed by the Caribs. Europeans upon conquering both islands decimated the aboriginals. Today, there are few landmarks left by the aboriginals and few in the population of today’s Saint Lucia and Grenada can claim Carib ancestry.

Grenada and Saint Lucia were owned several times by France and England especially in the 18th century when both superpowers waged wars against each other. During the French Revolution all slaves in Saint Lucia were declared freed in 1794. Grenada at that time was in the hands of the English but on March 2-3, 1795, the French population in Grenada revolted led by Julien Fedon and he abolished slavery in Grenada.

When the British captured Saint Lucia slavery was restored and they restored slavery in Grenada when the Fedon’s Revolt was aborted.

Both islands achieved Statehood in 1967 from England allowing the right to self-govern. 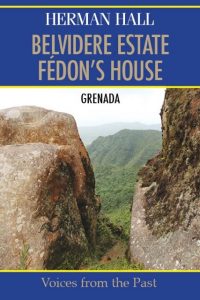 On February 7, 1974, Premier Eric Gairy led Grenada into independence and Premier John Compton did the same in Saint Lucia on February 22, 1979.

Give yourself or someone an Independence Gift by ordering Herman Hall’s Belvidere Estate – Fedon’s House.  www.everbodysmag.com