He is not forgetting New York’s Caribbean community. About 95% or more voted for him last November.

There he was strutting down Eastern Parkway with his family in Brooklyn’s West Indian carnival on Labor Day, September 2, a few days before the exciting Democratic primary.

Most NY-Caribbean Democrats voted for him in the very close primary.

Did we say Bill de Blasio is man of action and symbolism? Add a man of gratitude too!

On Thursday, December 19, the incoming mayor went to the heart of Brooklyn’s Caribbean community and he chose Friends of Crown Heights Educational Center, a kindergarten chain of prekindergarten facilities owned by a Caribbean-American family, to unveil his universal Pre-K policy.

He plans to raise taxes on the wealthy to fund universal Pre-K and afterschool programs.

“I believe than an absolute necessarily step forward for this city is to achieve the tax on the wealthiest New Yorkers so we can have full day Pre-K for every child and after school for every middle school child. And we will proceed vigorously to get that done in Albany,” Mr. de Blasio said at a Friends of Crown Heights Educational Center in Brooklyn. 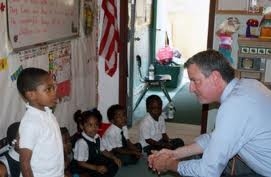