The Mighty Sparrow was presented a citation by Oliver Samuels on behalf of Irie Jam at Monday’s Oracabessa Concert in New York City. The Memorial Day Concert, produced by Irie Jam Radio, saluted Sparrow.  Samuels remained in New York for an extra day after staging his 2016 play, “Guilt Trip,” in Queens, NJ, Brooklyn and Bronx. Herman Hall Communications the promoter of “Guilt Trip” will stag 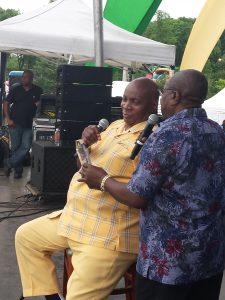 e the play in Boston, Silver Spring, Philadelphia and other cities in September-October.