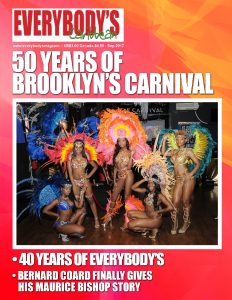 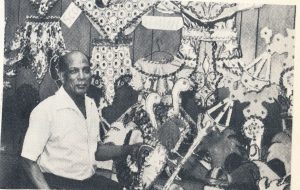 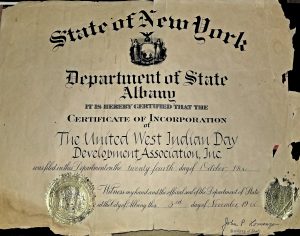 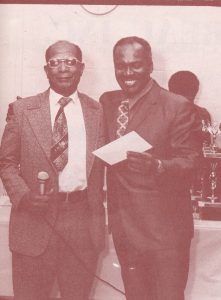 Brooklyn is celebrating 50 years of West Indian style carnival and the organizer of the carnival, the West Indian-American Day Carnival Association, Inc. (WIADCA), is ensuring it is a year-long celebration.

In April, WIADCA held a black tie gala honoring those who contributed (living or dead) to 50 years of carnival in the borough. At the Gala, speaker after speaker toasted the late Carlos Lezama and WIADCA.  Messages in the WIADCA Black Tie Gala Journal from public officials congratulated WIADCA for its 50 years of existence.  “I join in congratulating the West Indian-American Day Carnival Association for hosting this proud display of culture for the past half century,” wrote Governor Andrew M. Cuomo of New York. In her message, United States Senator Kirsten Gillibrand stated, “I am delighted to send greetings to each of you attending the Black Tie Gala & Evening of Excellence Awards Ceremony, which celebrates the 50th anniversary of the West Indian-American Day Carnival Association.”

In this age of “fake news” popularized by President Donald Trump any claim that WIADCA is 50 years old is “fake news” because WIADCA was organized in 1971. It is 46 years old and has presented Brooklyn’s carnival for 46 years. The association‘s first carnival journal launching its first carnival reads:

Some writers even think New York’s West Indian carnival began in Brooklyn. Not so! The credit belongs to Harlem in the Borough of Manhattan and West Indian immigrants in Harlem during the early 20th century.

Here are some significant milestones of carnival in Manhattan and Brooklyn:

1920s-1946 – Indoor carnival events including the famed Dame Lorraine were held at homes, basements and ballrooms in Harlem and upper Westside of Manhattan.

1947 – The first outdoor West Indian carnival (West Indies Parade) was held on Lenox Ave. in Harlem. The carnival-parade was held on Labor Day Saturday until the 1950s when as a result of violence the permit was revoked ending outdoor carnival in Manhattan.

1960 – As early as 1960, Lionel “Rufus” Gorin, a die-hard carnival masquerader organized unofficial outdoor carnivals in the block near his house at 105 Lefferts Place in Brooklyn.

1960s – Gorin’s carnival parades on Labor Day extended to a few blocks. Each year the police warned Gorin to stop organizing the parade without a permit. One year he was arrested – actually twice that Labor Day. He refused to accept three court injunctions to prevent him from staging the carnival. He was issued a summons. The judge did not see why it was illegal to produce a carnival-parade but a permit was necessary. Gorin was advised to get “a charter” from New York State thereby registering his organization with the State since its legitimacy would have enhanced Gorin’s chance of getting a permit from the police or New York City to officially organize a carnival-parade in Brooklyn. He did.

November 3, 1966 – New York Secretary of State John P. Lorenzo granted Gorin and his (UWIDDA) the certificate of incorporation.  Although Gorin was the mover and shaker of carnival in Brooklyn, he declined to accept the leadership position of UWIDDA preferring to focus on making costumes and creating masquerade bands; one Lester Isaacs was elected chairman.

September 4, 1967, Labor Day – The first official West Indian carnival-parade in Brooklyn was held on some streets off Fulton Street such as Dean Street and St. John’s Place. “From then on,” Mr. Gorin happily told me in 1974 “carnival was here to stay.”

1960-1970 – Most meetings of UWIDDA were held at Gorin’s home at 105 Lefferts Place and at the home of his daughter, Camilla Gorin Frank, at Clarendon Road but by 1967 Carlos Lezama, a member of UWIDDA, hosted meetings at his home, 1391 Dean Street..

1971 – Based on the initiative of Carlos Lezama, the carnival-parade was held on Eastern Parkway for the first time. The parade route the City gave went east from Grand Army Plaza to Lincoln Terrace Park off Eastern Parkway and Rochester Ave.

1971 – The Brooklyn Museum welcomed the idea of Carnival on Eastern Parkway and allowed its grounds, back of the museum, to stage the first Dimanche Gras show. All the official carnival shows are still held at the Brooklyn Museum grounds and the review stand is in front the museum.

1975 –For strategic and political reasons WIADA amended the charter to add “Carnival” to the organization’s name; its revised name was, and still is, West Indian-American Day Carnival Association (WIADCA).

From the perspective of speaking truth to history so that esteemed governmental representatives don’t perpetuate fake news of the kind they criticize the president for spreading, WIADCA needs come clean. If anyone has to be honored for setting the parade in motion for 50 years of Carnival in Brooklyn, it should be Lionel “Rufus” Gorin and his UWIDDA. As such, his name and UWIDDA, the organization which launched the first carnival in Brooklyn, should be at the center of this 50 years celebration. Getting our history correct requires us to call a spade a spade.

In 2021, WIADCA will be 50, carnival on Eastern Parkway will be 50 too and so will be 50 years of partnership between the museum and WIADCA. All the praise in 2021 must be given to Carlos Lezama and WIADCA but not in 2017.

On a humid Saturday, I visit 94-year old Camilla Gorin Frank, the Assistant Treasurer of WIADA in 1971 and 2nd Vice Chairman in 1972. She chides me for showing up in August when I promised to see her since April. The visit brings back sad and pleasant memories because I visited Mr. Gorin there in the early 1980s. Although, my visit is in search of Gorin’s UWIDDA Charter or certificate of incorporation, I could not help get into carnival commess with Miss Camilla.

“At the WIADCA gala in April in celebration of the 50th they honored almost anything that moved, including me, but your father and UWIDDA was hardly mentioned and you too.”

“Herman, I don’t let these people bother me you know. I forget about these people a longtime ago. They casually mentioned my father but they even had a picture with him and Lezama. I wonder where they got the picture from, I never saw it before.”

“Truthfully, I gave them that photo; let me give you this joke about how this picture was taken by Ken Chandler” I responded. “That photo was taken at the prize giving of 1975. Mr. Gorin was still mad at Mr. Lezama. WIADA gave your father ‘Band of the Year’ (even though the band from Boston won) hoping to placate him so he will join back with Lezama.  Regardless to winning Band of the Year your father still did not want to attend the prize giving event so Lezama sent me to beg Mr. Gorin since he knew Mr. Gorin liked me. He accepted my pleas. ‘Tell dem ah coming because of you’ your father asked me to tell WIADA members as I was leaving. If you study this photo very carefully, you will notice Mr. Lezama is very happy but your father is forcing a smile,” I explained to Miss Camilla.

At the passing of Gorin in July 1983 at 80, Peter Noel, the famed New York and Caribbean writer wrote in the Daily Challenge, “Lionel Rufus Gorin was the patriarch of New York’s West Indian carnival movement.”

Rev. Hilton White told mourners, “He gave the West Indian his existence in New York and we should remember him for that.”

The late New York calypso bandleader Daphne Weekes also commented on the life of Gorin. “After some people in Harlem tried to sabotage the parade one year by pelting us with bottles and stones … Rufus couldn’t take it. He loved mas and saw this as an opportunity to improve the carnival. He got a little charter to run the carnival in Brooklyn despite the fact that we were restricted to the back streets where the people couldn’t see us.”

At the funeral service, Mr. Lezama then president and chairman of WIADCA told the Daily Challenge, “He (Gorin) has contributed a lot. He was a great man.” The next day I accompanied Lezama and costume designer Errol Payne to the funeral home to pay tribute to Gorin for the final time. Lezama was deeply moved.

The cause of the feud between Lezama and Gorin was petty. Gorin brought Lezama into the carnival. “One Labor Day I met Gorin on the side of the road crying because the people Gorin said who promised to help him with the carnival never came. I felt sorry for the old man and told him I’ll help him from now on,” Lezama explained to me several times. Lezama then a young steelband player joined Gorin’s organization. He rebranded Gorin’s UWIDDA into the WIADA and took the carnival to a higher level.

The aging Rufus Gorin and his core supporters were not pleased with Lezama’s rise and name change of UWIDDA. “They thief the charter from me” was Gorin’s popular complaint. He proudly displayed the charter certificate at his home and made sure everyone who visited saw the charter to prove that he started Brooklyn’s Carnival. Lezama should be exonerated. Gorin’s love and passion was “making mas” or designing costumes and organizing masquerade bands. He was not an administrator. He allowed his Jamaican friend Lester Isaacs (father of Gregory Isaacs) to be the chairman of UWIDDA– an early example of Caribbean inclusiveness by going beyond narrow cultural insularity. Gorin hardly attended meetings. For example the minutes of UWIDDA executive meetings of April, May and June of 1967 reveal that Gorin was not in attendance. Lezama attended all of them and hosted the June meeting at his home.

Yet the moral authority and driving force of the first official carnival in Brooklyn sanctioned by the City of New York held on Labor Day, 1967, was Lionel “Rufus” Gorin. Gorin’s love of carnival is revealed in this 1961 letter. Excerpts:

ANNUAL PARADE AND DANCE IN B’KLYN

We are looking forward to greeting you at our coming affair … Half of the fun depends on the original ideas formulated by the music of which you are a part. Therefore we seek assistance from you and many other bandleaders by participating in this parade … We have made plans to the best of our ability to make this a long day of remembrance … Join us in our Parade.”

Lionel Gorin, born near Port of Spain, Trinidad & Tobago came to the U.S. in 1928. He horned the skills of costume making and developed the love of culture at an early age. Although, the young immigrant was not an organizer in Harlem’s Carnival he was a popular masquerader there . Gorin, a man of vision, sensed the shift of West Indians settling in Brooklyn rather than in previous years, Harlem, Manhattan. He organized Brooklyn’s early carnivals.

Gorin was not only a “mas man” and patriotic Trinidadian. His UWIDDA invited all Caribbean organizations, consulates and embassies to participate in Brooklyn’s Carnival.

This year, 2017, on the 50th anniversary of Brooklyn’s Carnival more than 50% of all young masqueraders and steelpan players (panorama participants) were born in the U.S. including the masqueraders on the cover of this magazine. Somewhere in heaven of carnival Rufus Gorin is smiling. His pivotal role as a pioneer in the development of Brooklyn’s Carnival must always be remembered and celebrated in spite of attempts to minimize his stellar contributions by those who should know better.