A poster created by the City, and displayed in retail outlets in Brooklyn’s Caribbean neighborhoods reads, “The City of New York is partnering with Brooklyn Borough President Eric L. Adams and the NYPD for a safer J’Ouvert.”

On the poster are children less than 12 years old parading in carnival costumes, it seems on a sunny day.

Evidently nobody has told the mayor, police brass and Adams that children are not in J’Ouvert. J’Ouvert begins around 3am and ends by 8am, a time when children are sleeping.

It seems the City has its carnival priority and security mixed up. J’Ouvert attracts less people and participants are dressed in rags and painted in mud certainly not in colorful costumes.

J’Ouvert is not about children. The photos of little children pasted on the City’s J’Ouvert poster is misleading and in poor taste.

West Indian-American Day Carnival Association, organizer of this weekend shows at the Brooklyn Museum grounds and the Eastern Parkway carnival-parade on Labor Day, is not the organizer of J’Ouvert.

A separate group organizes the event. This year, and for the first, the City officially recognized the group.

Gabay was one of thousands of brilliant people from across the nation who visits Brooklyn on Labor Day Weekend to show their Caribbean roots.

Because it was one of Governor Cuomo’s aides who were shot, this year elected public officials are appealing for a safe carnival.

“Those appeals are insulting to the Caribbean community since most of the killings over the years do not happen during the carnival or committed by revelers,” someone remarked yesterday. “Those crimes are committed off the parade route mainly by people who are not in the carnival.”

But, with NY primary falling each year a few days after Labor Day, politicians bond with the Caribbean community to get votes. Presidential hopeful Hillary Clinton did so when she ran for the US Senate.  Primary Day is September 13th this year. With so many public officials hoping to seek the mayoralty next year sensing that Mayor Bill de Blasio may be a one term mayor, they are pandering to NY Caribbean voters by using the carnival as their playing field.

In the meantime, the people who provide the music and glittering costumes are punished. Police have a curfew in places where steelband orchestras rehearse and costumes are made. They have to close by 11pm each night. 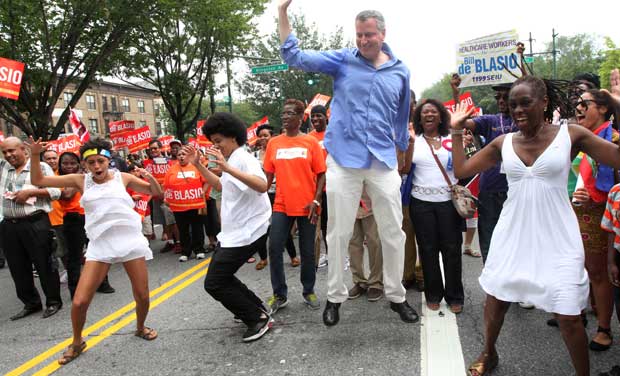 The Mayor, NYPD and other officials need to clarify if they are spending more resources on J’Ouvert or on the 3-mile carnival parade route which will attract more than 1.5 million revelers on Labor Day.

The statements by Mayor de Blasio and Commissioner Bratton asking for a peaceful carnival may have ignited passion. An unofficial police blogger calls this weekend carnival “A West Indian Day Death Pool.” The statement continues, “So what will be the final numbers for the 2016 celebration of a beautiful culture? This includes J’Ouvert and the parade.” NYPD is not responsible for the blogger actions and cannot identify any of its officers as the blogger.

PHOTO: Mayor de Blasio, his wife Chirlane and his two children, prance down Eastern Parkway when he ran for mayor.