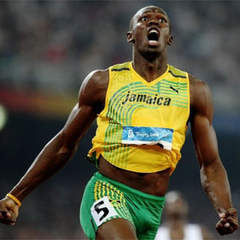 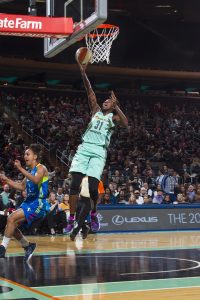 In a sense, all Caribbean Olympians of 2016 are our Person of the Year. However, we take pride in honoring Usain Bolt of Jamaica and Caribbean-American Tina Charles by proudly proclaiming them EVERYBODY’S Person of 2016.

Since its inception in 1977, EVERYBODY’S, the Caribbean-American magazine, has been naming its Person of the Year. The recipient must be of Caribbean background whether born in the region or abroad. The person or institution must have been newsworthy, make a stir and brought praise, recognition and honor to the Caribbean and its overseas communities during the present year. Examples are Penny Commissiong (1977), Calypso Rose (1978) Sir Arthur Lewis (1979) Dominica’s Prime Minister Eugenia Charles (1981), and Trinidad & Tobago Prime Minister Keith Rowley (2015).

We thank all contributors/readers who sent us their choice for 2016. Many suggested remarkable individuals; from family members to community leaders who for decades have been making valuable contributions to enhance the quality of life in their neighborhoods. However, EVERYBODY’S Person of the Year salute is not based on a lifetime of benevolence and achievement though sometimes it appears it is.

Not since boxing icon Muhammad Ali has the entire world, regardless of religion, race, color, ethnicity, language and nationality, found a person to cheer, support and admire as in Usain Bolt. Nations, except those who were competing against Usain Bolt, wanted him to win gold medals in the 2016 Olympiad in Rio. And, the nations eliminated in the preliminaries supported him in the finals. The intensity of worldwide support for him was so overwhelming that raucous cheering for him by viewers of the race at New York’s JFK International Airport triggered sensors causing a security alert.

Usain Bolt dignified not only his homeland, Jamaica, as the entire Caribbean community basked in his victory.

During summer 2016, people in the U.S and even across the globe, were confused and disgusted with the televised daily circus of the American presidential election. For a few days in August the world was not confused or bored. Billions glued themselves on TV to watch Usain Bolt. The truth be told; the most popular person around the world today is Usain Bolt not U.S. President-Elect Donald Trump and Vladimir Putin of Russia.

Track and field, soccer and basketball may be the most popular sports of our time. One billion or more basketball fans may have watched Tina Charles lead the U.S. Women Basketball team to victory in the 2016 Olympics. What most people, including many in the Caribbean, do not know is that Tina Charles, the other EVERYBODY’S Person of the Year, was born in New York City of Trinidad & Tobago and Jamaican parentage and that she often comes to Brooklyn for carnival on Labor Day Weekend. Her mother, Angella Holgate, is an immigrant from Jamaica.

Anyone who knows the calypso/soca hits such as the late Arrow‘s “Feeling Hot, Hot, Hot,” the late Lord Kitchener‘s “Sugar Bum, Bum,” The Mighty Sparrow‘s “Wanted Dead or Alive,” Blue Boy/Superblue‘s “Soca Baptist,” Swallow’s “Subway Jam” and dozens of other calypso and early soca hits would know the name Ralston Charles of Charlie’s Records, producer and distributor of calypsos. He is the father of Tina and he was there to cheer her on in London and Rio. They have a special bond; as soon as she arrived in China a few days before Thanksgiving/2016 she texted him.

While Ms. Charles is credited for leading the U.S. Women Olympic Basketball team to its Gold Medal in 2016 she was also on the 2012 team that won Gold in the Olympic Games held in England.

President Barack Obama welcomed Ms. Charles and her teammates to the White House on two occasions when she led the University of Connecticut (Uconn Huskies) to two national titles.

In EVERYBODY 2012 edition commemorating the 50th Anniversary of Independence of Jamaica and Trinidad & Tobago, the magazine recognized Ms. Charles as an outstanding Trinbagonian-American. Tina Charles presently plays as center on the New York Liberty team in the WNBA. At the end of the 2016 season in October, the WNBA announced that Tina won the 2016 All-WNBA First Team, a title she also won in 2012.

There was not much to cheer about during 2016 in the Caribbean. It was difficult to find a prime minister or political leader who exemplified leadership and wisdom. Travelers remain frustrated. An airline ticket from Trinidad to Grenada, 90 miles away, or St. Vincent to Antigua or Jamaica to Dominica cost as much as an airline ticket from New York to Barbados and sometimes even more. Fortunately, Caribbean Olympians from St. Kitts/Nevis to the Bahamas, Guyana and Antigua brought hope, pride, happiness and a feel of Caribbean integration during 2016 for their achievements at the Rio Olympics. The region and Caribbean people abroad rallied for Kirani James of Gouyave, Grenada, to win another Olympic Gold Medal as he did in 2012. He won a Silver Medal but his selfless actions on and off the tracks made Grenada and the entire region proud.

In a sense, all Caribbean Olympians of 2016 are our Person of the Year. However, we take pride in honoring Usain Bolt of Jamaica and Caribbean-American Tina Charles by proudly proclaiming them EVERYBODY’S Person of 2016.

ABOUT EVERYBODY’S Magazine:  It is the oldest of Caribbean-American publications; it has subscribers in many states from NY to TX. It is published six times yearly by Herman Hall Communications, Inc. The corporation also produces and promotes Caribbean concerts and plays. It is premiering the U.S. production of Oliver Samuels’ new comedy, “Four Can’t Play” at Brooklyn Center for the Performing Arts on May 20, 2017 and later in Bronx, Queens, CT, MD/DC, PA, MA and NJ. The publisher of EVERYBODY’S, Herman Hall, is the author of “Belvidere Estate – Fédon’s House” available at www.everybodysmag.com, amazon.com and Barnes and Noble Nook. A review is available from Kirkus reviews: Belvidere Estate – Fédon’s House