A former People’s National Movement (PNM) Senator and presently Chairperson of the Women League of the PNM, Pennelope Beckles-Robinson, is challenging her party’s Political Leader Dr. Keith Rowley for leadership of the PNM. Elections for senior executive positions within the PNM is due in May. If Beckles-Robinson is successful in toppling Rowley and becomes political leader she will  most likely be appointed Leader of the Opposition in the nation’s parliament and will lead the party  in the attempt to defeat Prime Minister Kamla Persad Bissessar and her UNC/People’s Partnership Government in the 2015 national elections.

If Beckles-Robinson leads the PNM to victory in 2015 she will become prime minister giving the twin-island nation two consecutive female prime ministers.

Dr. Keith Rowley was elected leader of the party after the PNM defeat in the last national elections and former Prime Minister Patrick Manning resigned as Political Leader of the PNM. 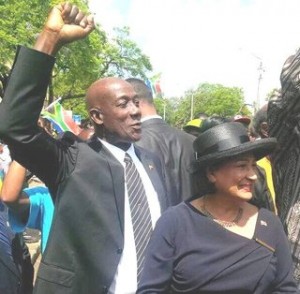 He has not yet led the party to compete in a national election.

Experts believe that Beckles-Robinson will not get enough votes to defeat Rowley in the May internal elections.

Surprisingly color has become an issue. A prominent member of the PNM remarked that Dr. Keith Rowley was too dark in complexion to become prime minister.