St. John’s, Antigua & Barbuda: The Antigua and Barbuda Labour Party (ABLP) led by Gaston Browne has regained power after 10 years as the opposition party in the nation’s parliament. Over 90% of the country’s eligible voters participated in the June 12 national elections. Around 11pm, Prime Minister Baldwin Spencer of the United Progressive Party (UPP) who governed for ten years called Opposition Leader Browne to congratulate him for his party winning 14 of the 17 parliamentary seats.

Prime Minister Spencer then addressed the nation by officially  conceding defeat and thanking the people of Antigua and Barbuda for conducting a fair and free election. “I wish to say to the people of Antigua & Barbuda that the democratic process in our nation is alive. The electorate of this country made a statement … They made a choice and of course, I have to accept.”

The outgoing prime minister also told the nation that he had already called the incoming prime minister.  “I congratulated him and told him I look forward to the ABLP governing this country in the interest of Antigua & Barbuda and that they can be assured of my support in the discharge of their responsibilities when I am satisfied that they are acting in the best interest of the people of this nation.”

Prime Minister Designate Gaston Browne will be sworn-in later today  by the Governor-General as the nation’s fourth prime minister. 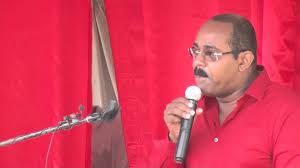