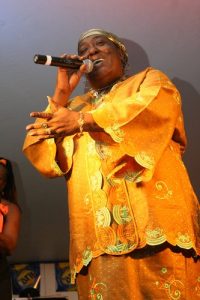 Singing Sandra, one the icons of calypso, has passed. She was 64. Born in East Dry River, Trinidad & Tobago in 1957, Sandra’s family on her father’s side, the John family, hailed from Gouyave, Grenada. Sandra performed frequently at the annual Fisherman’s Birthday in Gouyave. Sandra Des Vignes-Millington was the second woman to capture the National Calypso Monarch of Trinidad & Tobago. She took the title on two occasions. She was the 3rd runner-up in EVERYBODY’S World Calypso Monarch competition held in New York and seen on Pay-Per-View in several states. She performed at other calypso events such as in New York calypso tents prod

Singing Sandra lyrics were always uplifting. Her hits such as “Song for Healing,” “Voices from the Ghetto,” and “Ancient Rhythm” will remain classics.

Fay-Ann Lyons said, “Sandra was the embodiment of a powerful female artiste who always had a message in her music.”

“Sandra was the best calypso artist I ever worked with. She cooperated in every aspect of producing a show from transportation to rehearsals and she gave her all when on stage,” explained the publisher of EVERYBODY’S Magazine.