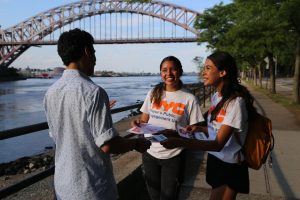 CUNY interns share an informational flier with a passerby while canvassing at PEU and Univision’s Contigo A Salvo event in Astoria Park. Photo courtesy of the Mayor’s Public Engagement Unit (PEU).

After an intensive three-day training program, interns jumped right in, distributing information and resources to more than 50,000 NYers on a range of topics, from tenants rights to health insurance enrollment to MetroCard discounts. During their time at PEU, interns attended over 40 tabling and outreach events, canvassed alongside Mayor Adams, appeared on television promoting NYC’s Fair Fares program, and used social media to get the word out about various benefits. They hit the pavement to promote GetCoveredNYC, NYC Care, Univision Nueva York’s Contigo A Salvo campaign, and more. Interns also offered free benefits screening to New Yorkers across the City using the ACCESS NYC screening tool. 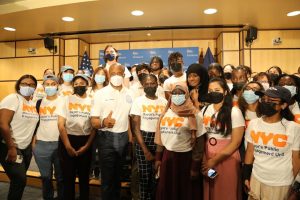 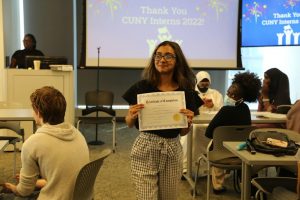 CUNY intern poses with her Certificate of Completion during the closing ceremony. Photo courtesy of the Mayor’s Public Engagement Unit (PEU).

Last week, as the students left their posts to return to school, PEU held a goodbye celebration with speakers, a photobooth, and presentations. Interns reflected on their favorite memories during their internship and shared their testimonials of how they were able to make an impact in different communities.

One of those interns was Nate, an incoming first year student at Borough of Manhattan Community College. Reflecting on his time with PEU, Nate shared, “[The internship] helped me to be more open to people, it also helped me to build my confidence.” Nate canvassed across New York City and found that New Yorkers were excited to hear about the many resources he and his fellow interns were sharing information about. “At the end of the day,” he said, “I always wanted to help people.” As he prepares to start his first semester, Nate’s excited to begin taking theater classes for his major, during which, he said, he’ll be applying what he learned in his internship. “When we’re out canvassing, you’re the center of [attention] and you have to be bold. I’ll take that with me into my acting classes as well.”

Another intern, Jen, reflected on her time canvassing with that Mayor, spreading information with New Yorkers about tenants rights and NYC’s rent freeze programs. They canvassed together in her home borough of the Bronx. “As he shook my hand,” she said, “I was inspired.” A medical student at Hunter College, Jen noted how important it was to learn about tenants rights and programs like rent freeze, which contribute to the collective well-being of communities like hers. She closed by saying, “As a community, we should come together and stay together, and that’s what I learned from being part of the Mayor’s PEU team.” 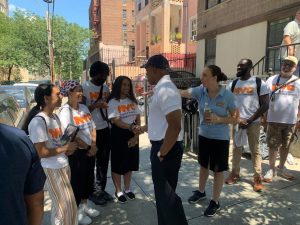 As New York continues to recover from the devastating effects of the COVID-19 pandemic, investing in both outreach connecting New Yorkers to City services and the futures of young people is key to ensure that our city gets back on its feet, better than ever.

“Through this program, CUNY interns are harnessing the real education. You are getting a peak into the lives of everyday New Yorkers,” said NYC Mayor Eric Adams. “There’s nothing more difficult than engaging with a stranger. But when you’re doing outreach like this for the City, you’re not only engaging with a stranger, you are also giving them the resources they need to thrive.”

“Proactively meeting people in their communities is a key component of PEU’s mission to connect New Yorkers to city services,” said Adrienne Lever, Executive Director of the Mayor’s Public Engagement Unit (PEU), “we’re delighted to have partnered with the CUNY Career Launch program in order to expand our outreach capacity, while supporting talented CUNY students launch their careers. We are sad to see them go but are so proud of the work we did together, and cannot wait to see what the future holds for these bright New Yorkers.”

“Paid internships put our students on the pathway to careers, helping them gain experience and make connections while making money they need. Internships also help our students secure jobs upon graduation, which is why I was thrilled to partner with Mayor Adams to launch CUNY Career Launch,” said CUNY Chancellor Félix V. Matos Rodríguez. “The 100 interns in the Mayor’s Public Engagement Unit continue CUNY’s long history of civic engagement and I know that what they learned will benefit them for years to come. I’m proud we have a Mayor who has faith in our CUNY students to make a difference and who continues to find ways to engage them in meaningful work-oriented opportunities.”

“I learned that a lot of New Yorkers don’t know about these programs being offered and getting to help them made me happy,” said CUNY Career Launch Intern Noely Guzman. “I became more outspoken. Talking to strangers is scary and challenging but it was a good experience to get out of my comfort zone.” 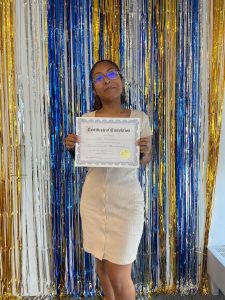 About the Public Engagement Unit

The NYC Public Engagement Unit (PEU) was created to develop a new model for government outreach, using community organizing principles to re-envision how the City provides services to its most vulnerable communities. Rather than expecting constituents to navigate a complex City bureaucracy to get the help they need, PEU adopts grassroots tactics to meet residents where they are — at their doors and on their phones, in their social media feeds and in their communities. PEU combines this proactive outreach with comprehensive case management, and in doing so, combats disillusionment and builds long-term relationships between New Yorkers and their government.

Career Launch provides 2,000 CUNY students with an opportunity for valuable paid work experience that connects to their major and career goals, as well as the opportunity to grow their professional networks. CUNY Career Launch is part of the City’s broader summer 2022 youth employment campaign.

About The City University of New York

The City University of New York is the nation’s largest urban public university, a transformative engine of social mobility that is a critical component of the lifeblood of New York City. Founded in 1847 as the nation’s first free public institution of higher education, CUNY today has seven community colleges, 11 senior colleges and seven graduate or professional institutions spread across New York City’s five boroughs, serving over 260,000 undergraduate and graduate students and awarding 55,000 degrees each year. CUNY’s mix of quality and affordability propels almost six times as many low-income students into the middle class and beyond as all the Ivy League colleges combined. More than 80 percent of the University’s graduates stay in New York, contributing to all aspects of the city’s economic, civic and cultural life and diversifying the city’s workforce in every sector. CUNY’s graduates and faculty have received many prestigious honors, including 13 Nobel Prizes and 26 MacArthur “Genius” Grants. The University’s historic mission continues to this day: provide a first-rate public education to all students, regardless of means or background. 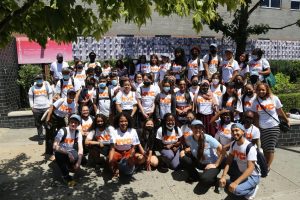