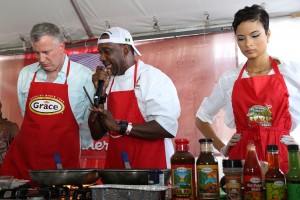 The mayor was accompanied by his wife Chrilane McCray who did not participate in the cooking demo.