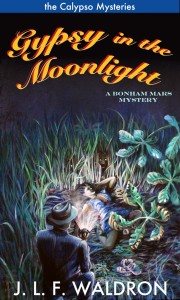 The launching of the much talked about book, Gypsy in the Moonlight,  by Lawrence Waldron, will be Tuesday, December 15 beginning 6pm at the Brooklyn Public Library, 22 Linden Blvd., Brooklyn, NY.  Gypsy in the Moonlight is a historical novel based on calypso music of the 1940s in Trinidad & Tobago when American sailors and soldiers were stationed on the island.

During World War II, the U.S.  had a base in Trinidad. The base remained there until after independence in 1962 when Prime Minister Eric Williams negotiated with the U.S. to end the 99-year agreement agreed upon by the U.S. and England.

The presence of American soldiers and sailors in  then colonial Trinidad & Tobago has been a topic of social commentary by calypsonians and writers.

Lawrence Waldron who teaches at City College of the City University of New York is the latest person to present the story of the American military in Trinidad.