New York City is preparing for the annual West Indian Carnival on Labor Day Weekend when over 1,000,000 revelers are projected at Brooklyn’s Eastern Parkway for the carnival-parade led by Governor Andrew Cuomo and Mayor Bill de Blasio. Caribbean Theater and Comedy Weekends in NY are scheduled for two weekends later, September 19 and September 26. 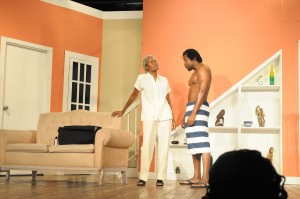 Although the famed Oliver Samuels and Barbara McCalla lead the cast in the suspenseful comedy play, “Divorce Papers,” Maylynne Lowe and Dennis Titus are sheer fabulous. The aging Saint Lucia and Trinidad & Tobago Nobel Laureate, Derek Walcott and the late Miss Lou of Jamaica upon seeing the brilliant acting of Maylynne Lowe and Dennis Titus in “Divorce Papers” may proudly proclaim, “The future of Caribbean theater is in good hands.”

Actress Jean White makes an excellent point when she says, “These days theater and comedy fans don’t only see Oliver Samuels in an Oliver play, they also see young and brilliant stars … And, the creativity of the award winning playwright, Basil Dawkins.”

White is confident that children and adults of all nationalities will enjoy the hilarious roles of Maylynne Lowe and Dennis Titus in “Divorce Papers.”

Both Dennis Titus and Maylynne Lowe could have remained in the U.S. and become household names on television, in motion pictures and on Broadway but they chose to return to Jamaica to contribute to theater, comedy and nation building.

Ms. Lowe is a graduate of the American Academy of Dramatic Arts in NY and Emerson College in Boston. She has appeared in Jamaica’s longest running television soap, Royal Palm Estate. She is a recipient of Best Actress in a Lead Role for White Witch of Rosehall. Maylynne Lowe other theater and comedy roles include After Mrs. Rochester, Uptown Bangarang, Toy Boy, Which Way Is Out and Uptown Bangarang 2.

Dennis Titus is a graduate of Edna Manley College, Jamaica. He developed his craft further in theater, film and television in the UK and USA. A friend remarked, “the opportunity of Dennis working alongside Denzel Washington in the Mighty Quinn, an experience which helped him into a dedicated professional.” Caribbean theatre critics have applauded Titus for his magnificent roles in Embassy Saga and Dolly House.