New York – April 17:  Basil Paterson, a famous African-American who was born in NY in 1927 of a Grenadian father and a Jamaican mother, died at Mount Sinai Hospital in New York City. The Paterson ancestral home is still on Carriacou, Grenada. Paterson, one of the most active politicians in New York City, maintained contacts with family members on the island of Carriacou and those living on the mainland of Grenada and Brooklyn, NY.

When his son, David Paterson,  became Governor of NY State in 2008, the first and only African-American to be the chief executive of NY, Basil Paterson told EVERYBODY’S that it would be nice for the then Grenada Government to invite father and son to officially visit Grenada and motivate the young people.  Basil Paterson suggestion was communicated to the then Grenada Government but nothing came out of it.

Paterson was a leader of civil rights and active politician in New York City.  He was part of the City’s famous four Black politicians in Harlem known as the Gang of 4 – Percy Sutton, Manhattan Borough President and co-founder of WBLS/WLIB, David Dinkins who later became mayor of New York City and Congressman Charles Rangel.

Basil Paterson was a World War II veteran.  Paterson is a graduate of De Witt Clinton High School in the Bronx, St. John’s and Columbia Universities. 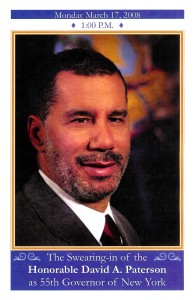 At his Brooklyn home, Dr. Lamuel Stanislaus who is  from Petite Martinique, Grenada said, “I am saddened about the passing of my dear friend, Hon. Basil Paterson. He was the son of a Grenadian father who I knew very well. I am proud of Basil’s family and his son, David, a former governor of New York.  I extend my deepest sympathy to his family.”

The publisher of EVERYBODY’S thank the late Basil Paterson for his support of this magazine and his willingness to chat with him about early West Indian immigrants, his love of Grenada and about his mother who was a secretary of Marcus Garvey.

Many national personalities from Bill and Hillary Clinton to Mayor Bill de Blasio and Governor Andrew Cuomo are expected to attend the funeral.