Both Dennis Titus and Maylynne Lowe could have remained in the U.S. and become household names on television, in motion pictures and on Broadway but they chose to return to Jamaica to contribute to theater, the performing arts and nation building. 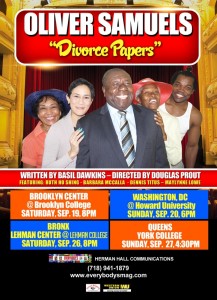 Dennis Titus is a graduate of Edna Manley College, Jamaica. He developed his craft further in theater, film and television in the UK and USA. A friend remarked, “The opportunity of Dennis working alongside Denzel Washington in The Mighty Quinn is an experience which helped him to become a dedicated professional.” Dennis Titus played the role of Percy in The Mighty Quinn. Critics have also applauded Titus for his magnificent roles in Embassy Saga and Dolly House.

No wonder Rev. Devon Dick, pastor of the Boulevard Baptist Church in St Andrew, wrote in the Gleaner. “….This play is not only for persons who are divorced or who are contemplating divorce, but for all persons interested in romantic relationships. It is a play for the entire family.”