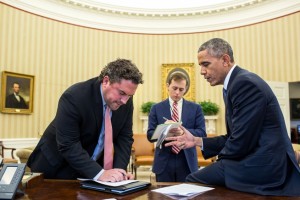 President Obama and speech writers prepare the final draft of the president’s immigration message to the nation. 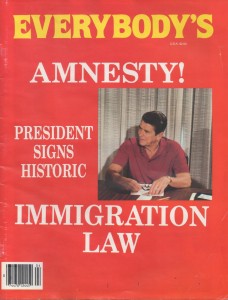 Brooklyn, NY – President Ronald Reagan signing legislation granting amnesty to millions of “illegal aliens,” as undocumented immigrants were then called was welcomed in the Caribbean-American community. As a result of Reagan’s vision, thousands of undocumented Caribbean aliens got permanent status. A few years later many opted to become U.S. citizens.
EVERYBODY’S Magazine graced its cover with Reagan photo and the Amnesty headline. One hundred copies were later requested by the Reagan White House. Today, it’s the era of twitter, facebook, TV newsmagazine and more …so EVERYBODY’S doing a comprehensive report on President Obama’s decision will be outdated even before the magazine gets to the printer.

The timing of President Barack Obama taking dramatic actions on the burning immigration issue was similar to the timing of President Ronald Reagan on immigration. Both presidents acted boldly during their second term.
There is a difference. Reagan twisted the hands of both Republicans and Democrats in Congress to get the Immigration Bill of 1986. Similar to Reagan’s Caribbean Basin Initiative (CBI) he signed during his first term, the president depended on Democrats in Congress to support and passed both pieces of major legislation, the CBI and Immigration Reform.
Regardless to Obama’s pleas, Republicans in the House of Representatives have steadfastly refused to consider Obama’s willingness to act decisively on immigration legislation thereby forcing the president to take executive actions.
“Our nation is a nation of immigrants. More than any other country, our strength comes from our own immigrant heritage and our capacity to welcome those from other lands. No free and prosperous nation can by itself accommodate all those who seek a better life or flee persecution,” President Reagan remarked on July 20, 1981.
President Obama focused on three major points during his national address on November 20, 2014. “First, we’ll build on our progress at the border with additional resources for our law enforcement personnel so that they can stem the flow of illegal crossings, and speed the return of those who do cross over.
Second, I’ll make it easier and faster for high-skilled immigrants, graduates, and entrepreneurs to stay and contribute to our economy, as so many business leaders have proposed.
Third, we’ll take steps to deal responsibly with the millions of undocumented immigrants who already live in our country.
I want to say more about this third issue, because it generates the most passion and controversy. Even as we are a nation of immigrants, we’re also a nation of laws. Undocumented workers broke our immigration laws, and I believe that they must be held accountable -– especially those who may be dangerous. That’s why, over the past six years, deportations of criminals are up 80 percent. And that’s why we’re going to keep focusing enforcement resources on actual threats to our security. Felons, not families. Criminals, not children. Gang members, not a mom who’s working hard to provide for her kids. We’ll prioritize, just like law enforcement does every day.
But even as we focus on deporting criminals, the fact is, millions of immigrants in every state, of every race and nationality still live here illegally. And let’s be honest -– tracking down, rounding up, and deporting millions of people isn’t realistic. Anyone who suggests otherwise isn’t being straight with you. It’s also not who we are as Americans. After all, most of these immigrants have been here a long time. They work hard, often in tough, low-paying jobs. They support their families. They worship at our churches. Many of their kids are American-born or spent most of their lives here, and their hopes, dreams, and patriotism are just like ours. As my predecessor, President Bush, once put it: ‘They are a part of American life.’”